This page provides some background information on a laser-cut puzzle based on a proof of Pythagoras theorem. 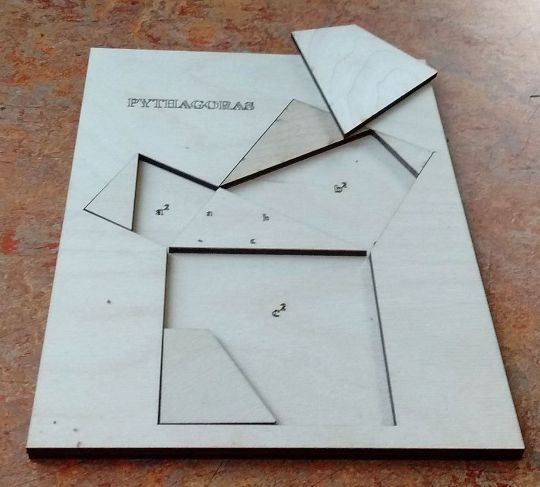 The puzzle is based on the fact that you can tessellate the plane using two arbitrary squares a2 and b2 and from this construct a third set of tessellating squares c2, as shown below.
This implies a2 + b2= c2, obviously the area of the plane is independent of how you dissect it.
(This might be a cool idea for your kitchen floor...) 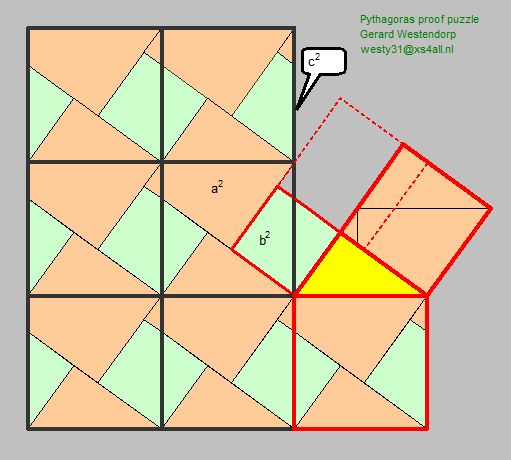 The puzzle has an a2 square translated so it aligns with a triangle.
To show that this construction works for all {a,b,c}, I made the animation below.

The nice thing about this proof, is that it can be made into a puzzle. The same is true for the more well known proof called as Perigal's proof.
Apparently, Perigal even has this one carved on his tombstone!
I thought Perigal's proof might yield a too easy puzzle, so I used this one.
It turns out to be surprisingly hard. When I first got it from the laser cutting shop, it took my several minutes to solve.

->Actually, after further Googling, I found that Al-Nayrizi may have discovered it in 900 AD.
I also found out that the tessellation of the plane I used is called a Pythagorean tiling. This Wikipedia page explains how both Perigal and Al-Nayrizi can be constructed from it.


You can buy this puzzle on Etsy.